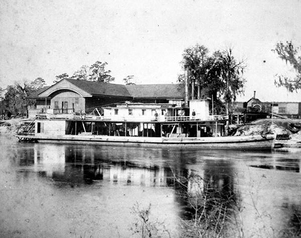 It is likely that Suwannee County gave at least 250 men to the confederate service during the Civil War.  Except for the loss of property in slaves (valued at almost half a million dollars), Suwannee County suffered little direct loss from the Civil War.  Between 1860 and 1870, the county’s population increased by 50%.
​
The first county seat was “the house of William Hines,” a local judge who lived northwest of present-day Live Oak.  Within a few months, Houston became the county seat.  The county seat was moved to Live Oak in August of 1868,.  Live Oak was founded in or before 1863 on the Pensacola and Georgia Railroad.  The land area was a section comprised of 640 acres.  On April 24, 1878, Live Oak was incorporated and the land area then was compromised of 960 acres.  In 1915, a charter was issued for the City of Live Oak to operate under and it is from this charter (including revisions) that the present Live Oak city government still operates.

At this time, Live Oak, Branford, and Welborn were the principal towns in Suwannee County.  Branford was first incorporated as a town in 1886.  During this time, it was known as “New Branford”, but later the word “New” was dropped and the town became Branford.  The community’s original name was “Rowland’s Bluff”.  Branford was once the point which old steamers hauling timber would travel the Suwannee River to Cedar Key.  This was a leading business at that time. 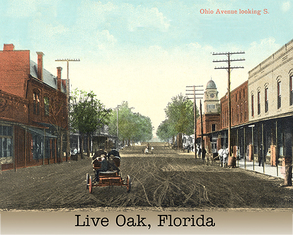 The twentieth century began with industries flourishing.  Live Oak and Dowling Park were the sites of the two largest sawmills in Florida, and Live Oak was the fifth-largest city in the state.  Now Suwannee County will be home to the largest sawmill in the southeast.  An immense amount of lumber was shipped on the Suwannee River.  Brick manufacturing, wholesaling, and farming were also thriving business.

A number of large springs are found in the county, among them Newland (Falmouth) Springs near Falmouth; Branford, Little River, Royal, Peacock, Suwannee Springs, and Sulfur Springs near the Suwannee River.
​
With steady population growth since 1960, and constant improvements in economic development, Suwannee County has become a desirable place to live and do business.  The charm of the area derived from its people and the fact that it has one of Florida’s longest and best loved rivers, the Suwannee.  Suwannee County does today, and will continue to bring additional property and opportunity to its citizens.